You may be interested to know that there was a Dublin Welsh Society in existence between 1964 and 1969.  This was formed primarily by a group of Welsh people who were studying at the time in Dublin but also included longer-term residents of the city.   The society organised monthly meetings with a variety of speakers and activities as well as an annual dinner to celebrate St. David’s Day in the city each year, all of which were very well attended.   Meetings of the society also led to the formation of a choir in October 1966 which became known as the Dublin Welsh Male Voice Choir.     The society eventually stopped meeting in 1969 when it was decided that the choir would take up the mantle as the focus of Welsh society in the city.  The choir has continued to do that without interruption ever since and celebrated the 50th anniversary of its foundation in October 2016.    Its conductor for 40 years was Keith Young, who served for a time as treasurer of the Dublin Welsh Society during its existence.

Keith and fellow Dublin Welsh Society (and Draig Werdd) member Gareth Lloyd Jones have put a document together which contains handwritten minutes of the society meetings during its existence.   Click here to view this document.   The images below may also jog a few memories for those that were active in the society in the 1960s.   These show the front and back of the membership cards for the Society in 1964-65 and 1965-66, and make for interesting reading in terms of the activities of the society and the people involved, some of whom are still current Draig Werdd members.   The first treasurer of the society, Richard Lloyd-Jones, recently travelled from Australia to take part as a chorister in Dublin Welsh choir’s 50th anniversary concert in the National Concert Hall, Dublin and one of the initial committee members, Janice Williams, is still an active member of Draig Werdd.

Thanks to Keith and Gareth for researching and collating the minutes and also to Gareth for providing images of the cards, which he came across when doing some (obviously) long-overdue clearing up activity! 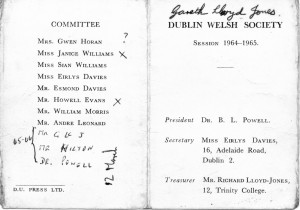 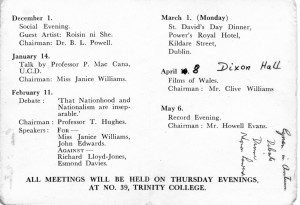 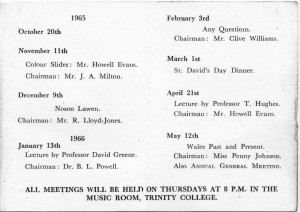 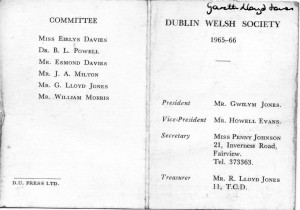 Padraig Pearse and the 1899 National Eisteddfod

An interesting and little-known aspect of Welsh-Irish relations was the induction of Padraig Pearse as a member of the Gorsedd of Bards at the National Eisteddfod in 1899 which was held in Cardiff.   Pearse subsequently became a leader of the Easter Rising in 1916 and was executed for his involvement.

Click here to download a pdf document containing photos and press cuttings relating to this event, and the celebration of its centenary in 1999.  The document refers to the “Pan-Celtic Eisteddfod” rather than “National Eisteddfod”, which initially led to some confusion amongst the Draig Werdd editorial staff.  However, we are grateful to Kevin Barry of the University of Delaware for clearing the confusion with the following explanation:

The Celtic Association (official name of the Pan-Celtic movement formed in 1898), planned to hold (and indeed, did hold) Pan-Celtic Congresses every three years in one of the Celtic nations. The first one was scheduled for 1900 (later postponed until 1901) in Dublin.  However, when a delegation of the Pan-Celts decided to visit the National Eisteddfod in Cardiff in 1899, a decision was made to make the reception of the Pan-Celtic visitors a central part of the Eisteddfod. Hence the Celtic Association began referring to it as the ‘Pan-Celtic’ Eisteddfod, and even the Western Mail began adopting the practice of referring to the Cardiff National Eisteddfod as the ‘Pan-Celtic Eisteddfod.’

The original Celtic Association held three Pan-Celtic Congresses, one in Dublin in 1901, one in Aberystwyth in 1904, and one in Edinburgh in 1907. Of the three, the Aberystwyth was by far the most successful, as it managed to make a profit of about 160 pounds. The other two both resulted in substantial losses, and this was the main reason that this first attempt at creating an active Pan-Celtic society failed.

The Welsh Chapel in Dublin

Amongst the papers of the Anglesey Monthly Meeting held in the county archives in Llangefni is a highly interesting collection dealing with the Welsh Chapel in Talbot Street, Dublin, the only Welsh chapel there’s been in Ireland, which came under the authority of the Anglesey circuit.

As can be imagined, this started as a religious outpost for the hundreds of Welsh sailors who visited the city, which held services in the various ships which happened to be in Dublin port.  It was felt that this arrangement was not sufficient, and a chapel was built in Talbot Street in 1838, not far from the centre of the city.  With the opening of the chapel, the congregation was extended to include Welsh people who worked in the city itself.  Despite this, the maritime influence remained strong.  The gallery was called the “quarter deck” and only sailors were permitted to sit there.  On the ground floor of the chapel, or the “main-deck” as it was called, men sat on the “starboard” (the right-hand side) and women on the “port side” (the left-hand side).   There were also some unexpected items there, such as spittoons near some of the men’s pews, and at the beginning smoking was permitted.

The chapel was an island of Welshness in the middle of Dublin, to the surprise and admiration of the Irish, as Ernest Blythe, the finance minister of the Irish government, explained in 1951:

When I joined the Gaelic League and began to learn Irish, one of my fellow members told me, almost with bated breath, that the Welsh community in Dublin had its own church in which services were conducted in Welsh.  I went there one Sunday morning to revel in the sound of a language closely related to Irish.  That little Welsh-speaking congregation, maintaining its individuality in a foreign city, made a profound impression on me.

However, there was another side to this, given the troubled history of Ireland.  Although members of the chapel were never attacked, there was animosity towards Protestants in Parnell’s day, in particular after the failure to achieve self-government, the common feeling among the Irish being that opposition from Protestants was one of the reasons for the failure.  During this period, stones were thrown at the chapel, causing windows to be broken.  One member was so afraid that he came to the service with a revolver in his pocket.   In the same way, the Easter rebellion in 1916 caused difficulties, and it was necessary to close the chapel for over a week because of the fighting.   During the rebellion, so it’s said, the minister John Lewis received a bullet through his hat brim.

Although going through troubled times, the chapel kept going, even though the number of members became fewer each year.   In December 1939 the monthly meeting in Llangefni decided to close the chapel for the duration of the war, because of the difficulties involved in ministers crossing the sea for the services.  In August 1944 it was reported in the monthly meeting in Cefn Bach that the chapel had been sold, and that was the end of the only chapel of the Calvinistic Methodists that has existed in Ireland.

The chapel building still stands in Talbot Street.   For a period it was a shoe shop, then a snooker hall.  Perhaps it would be an idea to erect a plaque on the building to commemorate its origins.  What is the opinion of Draig Werdd members about this?

Draig Werdd member Howell Evans, who died in 2012 at the age of 104, was a former member of the chapel.   Click here to read Howell’s own history of the Welsh Chapel in Dublin, including his personal reminiscences.

RTE broadcast an item about the Chapel shortly before Howell’s death, which included an interview with him:

“At Anchorage in Dublin”, a book on the history of the Welsh chapel in Dublin, was published by the Genealogical Society of Ireland on March 1st, St. David’s Day in 2012.  This is an English translation of “Wrth Angor yn Nulyn” by Huw Llewelyn Williams, originally published in 1968.   The new translation is by Meirion Llewelyn Williams, son of the original author.  The book sets out a century of the history and recollections of the times, the people and eventual closing and transferring of this Methodist Chapel to Wales. Included now are also the Registers of Marriages (1892-1936) and Baptisms (1839-1923) and other genealogical information. ISBN: 978-1-898471-72-1 : Price €6.00 (£5.00).   Copies of the book can be obtained by contacting the Genealogical Society via their website at http://www.familyhistory.ie.

01/03/2012 Howell Evans sadly died in January 2012 at the magnificent age of 104.   Information received from Mr. Gwynn Jones in Anglesey informs us that there is another member of the chapel still living – Miss Netta Jones, who now lives near Holyhead in Anglesey, and is now the only surviving member of the chapel.   We also received from Mr. Jones a copy of the very interesting article shown below, taken from ‘Y Drysorfa’ (a publication of the Calvinistic Methodists in Wales) which reports on the opening of the chapel in 1838.  An English translation appears below the article.

The Welsh in Dublin have been accustomed to gathering to worship in their own language for about six years, in the Dutch Church.   Subsequently they moved from place to place for a season, before it was judged wholly necessary to have their own place of worship.  At the beginning of this year a piece of land was acquired in Talbot Street, which was obtained at a lower cost than otherwise because of the intention to build a chapel on the site.  In addition to that, the owners of the land gave £15 towards the building.

The preachers had such support for their message, and the people such a pleasure from the listening, that it will be fondly remembered for a long time to come.

£24 3s. 3d. was collected on the day of the opening.   The cost of building the chapel was £500, £110 of which was collected in Dublin, and £200 in Wales.   Thus another £190 is still owed.  We recognise, with warm thanks, the kindness and generosity of our friends in Wales towards the cause in Dublin; and we hope with confidence that they will help again, not only to finish paying for the building of the chapel, but also to provide a small room at the wall, which would contain a bed, table, chair and candlestick so that a guest preacher may stay there when they come to visit us.