Draig Werdd marks St. David’s Day (March 1st) every year by holding a celebration in Dublin, either a dinner with guest speaker or an informal party.   Here is a list of functions from previous years: 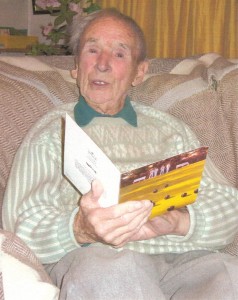 Howell Evans, Draig Werdd’s oldest member,died in Dublin on January 21st, 2012, at the age of 104, after a short illness.    Howell lived most of his life in Dublin, the family having moved there when Howell was very young after his father was transferred from Holyhead through his job with the LMS railway company.   Apart from a period when he attended secondary school in Holyhead, Howell spent the rest of his life in Dublin.   Despite that, he remained a proud Welshman and spoke the fluent Welsh that he had learned at the family hearth throughout his life.

Howell and his family were members of the Welsh chapel in Talbot Street, Dublin, until the chapel closed during the second world war.  Howell’s history and reminiscences of the chapel can be read by  clicking here.   He also took part at the age of 103 in a programme about the chapel which was shown on RTE television last year – you can see this by going to http://www.youtube.com/watch?v=cpFHYO-DNZ4.    Howell was also a founder member of Dublin Welsh Male Voice Choir, singing with them until well into his 80s, as well as being an active member of the St. David’s Society.

Howell remained active and alert and retained a lively interest in life right up to his final days.  He lived at his own home in Blackrock until illness forced him to move to a nursing home in Glenageary, Dublin for the final 15 months of his life, where he enjoyed the love and care of the staff.   His only complaint was the inability to have proper conversations with his fellow residents, the home being “full of old people”, as he told me shortly before his death.     His death represents the passing of an age, and I for one will miss my regular visits to him where we enjoyed the opportunity to converse together in the language of heaven.    Hopefully he’ll have plenty of opportunity to carry on doing that in the life to come.

At Anchorage in Dublin 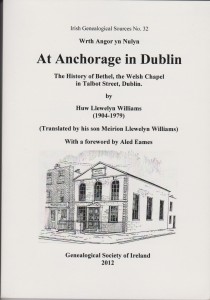 “At Anchorage in Dublin”, a book on the history of the Welsh chapel in Dublin, was published by the Genealogical Society of Ireland on March 1st, St. David’s Day 2012.  This is an English translation of “Wrth Angor yn Nulyn” by Huw Llewelyn Williams, originally published in 1968.   The new translation is by Meirion Llewelyn Williams, son of the original author.  The book sets out a century of the history and recollections of the times, the people and eventual closing and transferring of this Methodist Chapel to Wales. Included now are also the Registers of Marriages (1892-1936) and Baptisms (1839-1923) and other genealogical information. ISBN: 978-1-898471-72-1 : Price €6.00 (£5.00).

Go to http://www.welshsociety.ie/features for more information on the chapel from this website.